Finishes will often crack because no consideration has been given to the structure underlying the finishes zone.

Putting control joints in their place

The problem with following the simple dogma of randomly forming 6 metre or 3 metre bays to suit paving aesthetics is such that finishes will often crack because no consideration has been given to the structure underlying the finishes zone. There are very few cases in which the tiling contractor is responsible for cracking that occurs in finishes and yet invariably they are blamed.

Bay size and the movement capacity of the control joint system are not the only considerations which must be borne in mind when determining control joint spacing and locations. This is particularly important when flooring is installed on suspended, beam supported slabs. The exigencies of modern construction means that almost all large scale structures are build using suspended construction techniques and even slabs which seem to be ground supported are actually laid on ground beams.

Worldwide hard flooring standards are suitably vague when it comes to giving advice on joint location and the tiling contractor is often advised to seek the advice of the designer or engineer. For instance, BS 5385 states that: ‘At the design stage the magnitude of any stresses should be assessed and a decision should be made as to where movement joints, flexible joints and contracti on joints are to be located, having regard to all the relevant factors including the type of flooring and bed’.

Nevertheless some direction is given within BS 5385 Part 5 and this may be summarised as follows: ‘Flexible joints should be used at floor perimeters and to divide the flooring into bays at the intervals give in the relevant flooring sections. Where possible they should coincide with structural features such as columns or door openings….’

‘Flexible joints should be inserted over supporting walls and beams and at intermediate positions to accommodate deflection of the base and movements in the flooring.’ Creep is the reason control joints are inserted directly over beams and at ‘intermediate positions’. Over time beams (and slabs supported by beams) begin to sag from a combination of dead load (their own weight), super dead load (the mass of finishes etc.) and imposed loading which can be fixed or transient in nature.

Figure 5 above shows how beams creep over time. Creep happens progressively over the life of the structure, happening quickly at the beginning while components are still plastic with the rate of deflection slowing after the first few years. The implications for hard finishes fixed on top of suspended slabs can be significant if the control joints are placed in the wrong position… and particularly if the compressive forces generated at the mid-point of spans are not accommodated. BS 5385 is clear about the fact that control joints should be installed directly over beams but one has to look at BS 8110  ‘Structural Use of Concrete’ to find further advice about whether control joints need to be installed at the mid-point of the span of a concrete slab. 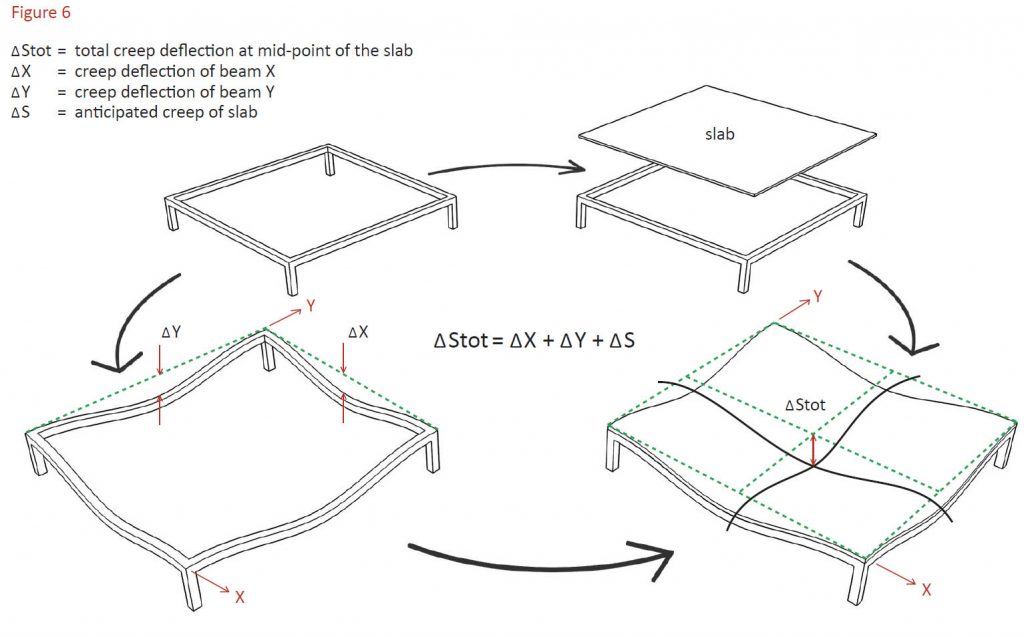